Review: GIANT LITTLE ONES Lacks Originality But Has Plenty Of Heart

Giant Little Ones is a new coming-of-age drama written and directed by Keith Behrman. The film is about two popular teen boys who find their lives changed after they have a drunken sexual encounter after a party and one of them begins to spread rumors about the other. It debuted at the 2018 Toronto International Film Festival to positive reviews.

There have been more effective coming-of-age movies made that come from the same or a similar perspective as this, but the story is compelling nonetheless because the coming-of-age arc is one that is universal. Everyone has to grow up, and everyone will experience at least one of the struggles faced by the protagonist. Sure, the fact that he faces them all may be a bit over-the-top and contrived, but the story is still relatable.

One of the more prominent issues with the film is that it is a bit heavy-handed with the message. From the beginning of the movie, you can tell what the message is going to be: love who you love without paying attention to labels that society may place on you. This theme is spelled out in a relatively contrived speech by the protagonist’s father, but referenced multiple other times. Although the message is certainly noble, it would have been more effective had it been handled with more subtlety.

In terms of character development, the film was somewhat uneven. All of the characters felt somewhat archetypal, with many of the supporting characters feeling largely underdeveloped. The movie would have benefitted from being twenty minutes longer and exploring some of the relationships in the story with more depth. For example, the protagonist’s relationship with his parents had a lot of potential and did not feel developed enough.

That being said, the film does move along at a very good pace. There is never a dull moment in the movie, and it doesn’t ever feel like the script is heading into redundancy. The film isn’t particularly dark for a movie that is heavily focused around bullying, and that is pretty refreshing. There are some great comedic relief moments and plenty of touching scenes that don’t feel the need to pull on your heartstrings to elicit an emotional response. 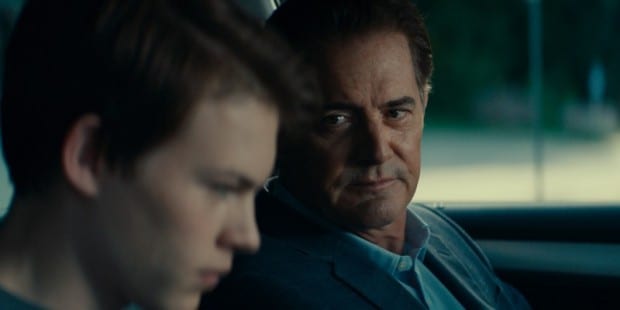 The film’s ensemble is also good. Josh Wiggins, who plays the protagonist, does a great job in the role. He brings a certain quiet charm to the character, making him feel more real. There are a handful of emotional moments in the movie which he could have easily played in an over-the-top way, but Wiggins goes for the more subtle and nuanced route to great effect. Standouts in the supporting cast include Maria Bello, Kyle MacLachlan, and Niamh Wilson, although they are all unfortunately underused.

However, the area in which the film stands out the most is its execution. The visuals are great. The cinematography is beautiful, doing a great job of capturing the emotion in every frame. There are a few really interesting visual motifs in the movie, like water or a flare gun, that add color to the film’s visuals and tone. Additionally, the score is very rhythmically interesting and complements the tone quite well.

Overall, Giant Little Ones was a pretty good coming-of-age drama. Even though the story isn’t the most original, it is still compelling nonetheless.

Giant Little Ones is now playing in theaters.