Review: SHADOW Is A Magnificent Return To Form By Zhang Yimou

Shadow is a new Chinese action film from director Zhang Yimou (Hero, House of Flying Daggers). Taking place in an ancient Chinese court, the movie is about a military commander who defies his young King’s orders to start and win a war against one of the kingdom’s former allies. It has played at festivals including the 2018 Toronto International Film Festival and the 2019 Florida Film Festival.

The film does have a story, but honestly, who cares about it? This type of movie isn’t about the story, it’s about watching some awesome fights, and the movie delivers on that front. The narrative only serves as a way to lead our hero into battle, and while this does lead to some unnecessary exposition in the first act, you’ll still be enjoying it nonetheless.

The same goes for the character development. You do care about the characters, but not apart from their archetypes. The hero of the film, the eponymous shadow, is a compelling character because… well… he’s the hero. He isn’t given a ton of backstory, but he doesn’t need one, because he’s the shadow. The movie works best if you turn your brain off and accept it for what it is, because it’s great at doing what it sets out to do.

The pacing of the film is excellent. The entire second half of the movie is an epic battle sequence that, once it begins, does not let up in terms of pacing or suspense. If you like martial arts films, this extended sequence will make Shadow one of the most fun movies of the year for you. The first half is less action-packed and intense, but still well-paced, containing some short but effective bursts of action. 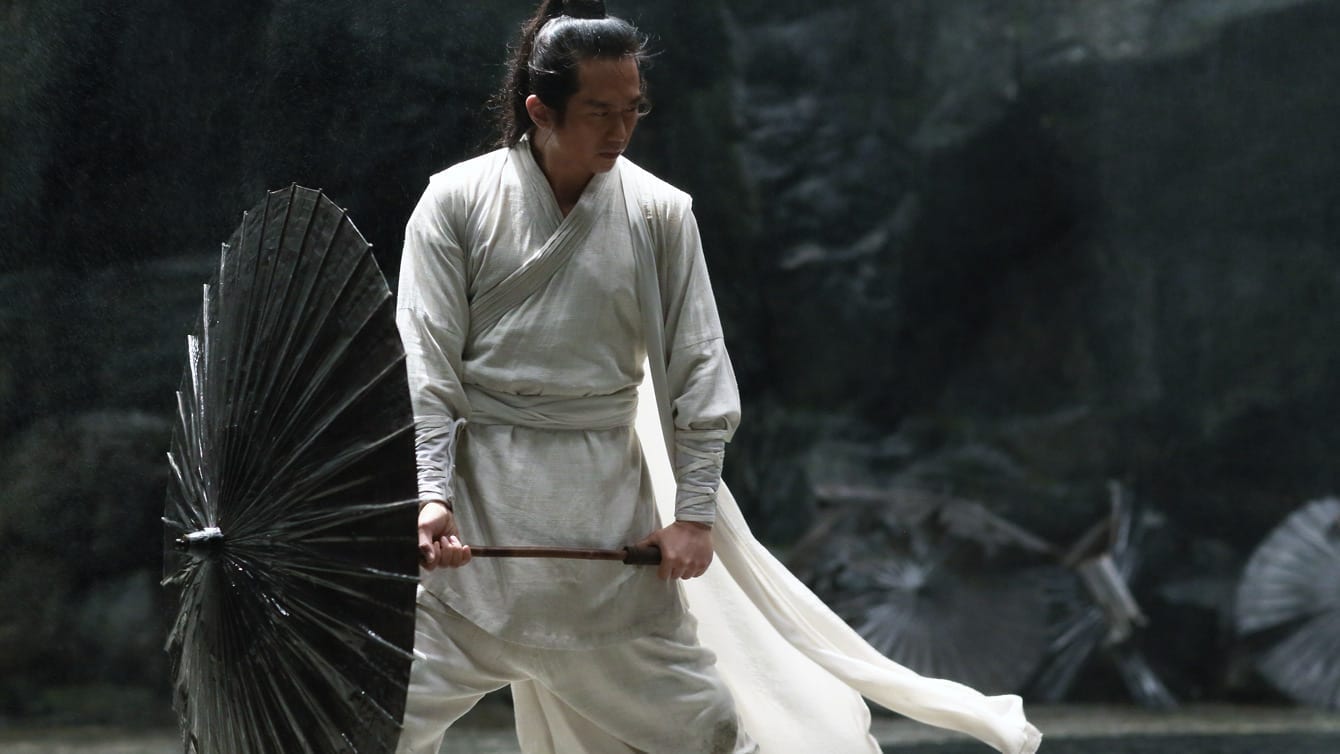 The choreography for the action is super creative and fun. This is a much darker and grittier version of martial arts action as compared to some of Yimou’s more surreal and classical work. They fight with sword umbrellas. Yes, umbrellas made out of swords. If that sounds awesome to you, you will be impressed. The last forty-five minutes of this film are truly insane and a spectacle that you have to see on the big screen.

In addition to the action choreography, the movie is very well-executed as a whole. The cinematography is absolutely brilliant. The way in which slow-motion is used in the action sequences is effective and never feels excessive. Water is used in the visuals frequently to great effect. Additionally, the production design does an excellent job of periodizing the film.

The actors all do a very good job in their roles. Chao Deng plays a dual role in the movie, and he does an excellent job. The ways in which the film was shot to mask his dual role are very impressive. With his ability to handle the choreography, hopefully we will continue to see him getting more lead roles in action movies, as he also adds a layer of emotion to the character.

Overall, Shadow may not be the most complex film in terms of provoking thought, but it is surely complex in terms of execution. This is certainly one of the best-looking movies to come out this year so far, so it is one you will absolutely want to see in a theater.