Wild Nights with Emily is a new historical romantic comedy film written and directed by Madeleine Olnek. The movie tells the little-known and often contested story of poet Emily Dickinson’s personal life, including her relationship with another woman. It debuted at the 2018 SXSW Film Festival.

Anyone who is a fan of literature will likely find this story to be interesting. Dickinson is perhaps one of the most highly revered poets of all time, so hearing the untold story of her personal life will be intriguing to many of her fans. However, the way in which the film is presented seems meant to inflame by countering previously commonly accepted understandings of Dickinson’s life.

A significant part of the reason the movie works is that the romance at the core of the film is so compelling. The chemistry between the two characters is great, and their bond is developed very sympathetically over the course of the movie. It helps that Dickinson’s actual poetry is incorporated into the script, as it legitimizes the emotion being expressed.

One of the factors that makes this romance compelling is that the characters are well-written. Dickinson is an extremely likable and often relatable protagonist. We care about her happiness and want her to find love and fulfillment by the end of the film (although we sadly know her fate). Her love interest, Susan, is not as deeply-developed, but is still quite likable because of her association with Dickinson. 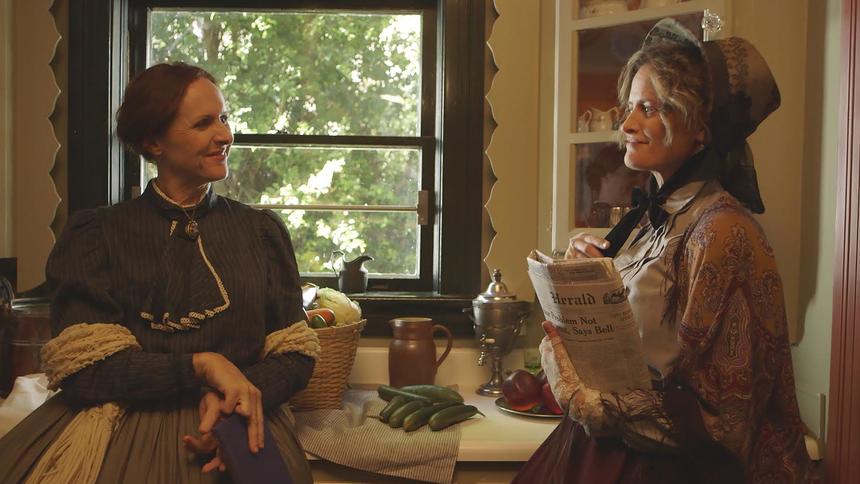 Although the movie is enjoyable, it does not achieve what it seems to be going for in terms of pacing. In many ways, it appears like Olnek is trying to turn the story into an Austenian-like tale, but the film lacks the level of wit necessary for that type of comedy to be successful. In a few scenes, the movie does reach that level of hilarity, but these are few and far between.

Molly Shannon’s lead performance is one of the film’s highlights. She does a great job of capturing the personality that can be perceived of Dickinson through her writing. Although there is certainly a comedic tinge to the role, it is much more dramatic than many of the other roles she has done before. She is complemented well by Susan Ziegler, and Brett Gelman has an excellent bit part.

On a technical level, the movie is mostly strong, although there are some things that could have been improved. The costuming does a very good job of setting the time period of the film, although this contrasts with the largely modern look of the cinematography. Had the filmmakers opted to use more old-school techniques, the movie could have been far more immersive.

Overall, Wild Nights with Emily is an intriguing true story rom-com. Although it does feel like it is trying too hard at times, it is well-acted and often funny, so it is worth your time to check it out.

Wild Nights with Emily opens in theaters on April 12.