Villains is a new dark comedy film written and directed by Dan Berk and Robert Olsen and starring Maika Monroe and Bill Skarsgård. It tells the story of a couple of amateur criminals who encounter a sadistic husband and wife when they break into their home after their car runs out of gas. It made its debut at the 2019 SXSW Film Festival.

This movie is a satirical and comedic take on the home invasion genre, and it works quite well. If you think of Don’t Breathe, but as a comedy, that is pretty much what you have with this film. It plays with the tropes in interesting ways, and while the ending is ultimately rather predictable, there are plenty of twists and turns that are unexpected.

Towards the beginning of the movie, the two leads adhere pretty closely to the Bonnie and Clyde archetypes that are so common of films that feature criminals as their protagonists. However, as the movie goes on and things begin to get crazy, they start to defy their archetypes and become far more sympathetic. The relationship between the two is also extremely compelling, one of the main reasons you want them to succeed being for them to have each other.

For a horror-comedy, the film has a great balance between suspense and humor. It is rare that a movie with a lighter tone like this is able to keep you on the edge of your seat for such a prolonged amount of time, but this film manages to keep you in anticipation for a significant majority of its runtime. Both gore and jump scares are minimal but effective when present. Instead, the movie uses traditional suspense tactics brilliantly to keep you interested. 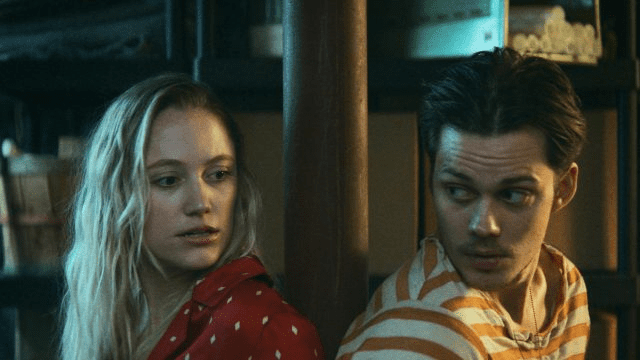 The film’s sense of humor is also quite effective. A significant majority of the funniest parts come from the fish-out-of-water aspects of the movie, with the protagonist being characters with modern lower-middle-class sensibilities and the antagonists being characters with old-school upper-class characteristic. There are also a lot of laughs simply in the absurdity of the situation.

The actors all do a great job in their roles. Skarsgård and Monroe are extremely compelling leads. They both bring a lot of charisma to their characters, which is necessary to make them sympathetic. Jeffrey Donovan and Kyra Sedgwick are both great as the antagonists, delivering performances that are wonderfully goofy and fun to watch.

Additionally, the film is quite good on a technical level. A significant majority of the movie takes place on the single set of the house, but is a wonderfully designed set. The house is created in a way that feels very retro, doing a great job of accenting the film’s humor. The cinematography and score are also extremely strong, adding a lot to the movie aesthetically.

Overall, Villains was an extremely impressive film. With compelling characters, tons of suspense, and lots of laughs, this is one you should put on your radar.

Villains is now playing at the 2019 SXSW Film Festival.